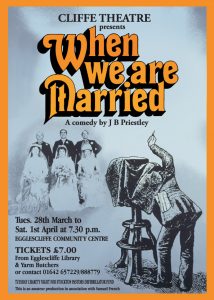 Twenty five years ago the Helliwells, the Parkers and the Soppitts were married on the same day by the same parson and they have gathered at the Helliwell home to celebrate their silver wedding.

The new chapel organist has recently met the parson who conducted the triple marriage ceremony and has discovered that he was not authorised to do so.

Pandemonium breaks out when the three couples, all pillars of society, believe they have been living in sin for the last twenty five years.

The action takes place in the sitting-room of Alderman Helliwell’s house in Clecklewyke, a town in the West Riding of Yorkshire in the year 1908.