Bethany Strain will be the new treasurer, taking over from Jenifer Dodsworth who has done the role for OVER 10 YEARS. All subs and expenses to be sent to Beth.

A big thank you to Stuart Landreth for arranging the quiz night which was enjoyed by everyone who attended. Thanks to Jen, Ann and Alan for setting out the hall in the afternoon and to Sara (Jen’s daughter) for preparing the buffet. The winners of the quiz were; Dot Bell, Catherine, Brian, Rosie and Sarah McCarthy and Jack Hamilton. Well done to this team. The runners up were Mark & Mary Brookes, Beverley Landreth and Neil Whitehouse. Congratulations to everyone who took part.

This was well attended by members and annual reports were provided by; Chairperson, Secretary and Treasurer. The ‘President Shield’ was awarded to Fiona Cook and the ‘Ray Danby’ trophy awarded to Beth Strain. A new committee was elected click here for details.

A new social event this year was well supported at the George and Dragon Pub in Yarm. Amazing food and thoroughly enjoyed by everyone who attended.

Thanks to Jan Nicholson for organising the walk which left from Great Ayton. This was well attended and everyone enjoyed a lovely evening.

Our Domino Drive at the Cleveland Bay led by Geoff Mankin, wasn’t as well attended as we had hoped, but the 24 people who turned up all enjoyed the evening. The ‘Pies and Peas’ served by Piejackers were delicious and the winner was Sheilagh Chadfield with Dot Bell winning the ‘booby’ prize. 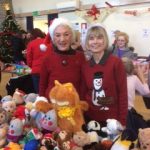 Thank you to everyone who contributed soft toys.

In September the group performed the play ‘After the Flags and Bands’ written by Allan Williams and directed by Jackie Wilson. The play follows the changes in the lives of four young women over the course of the First World War and how their close friendship helps them cope with love, loss and first hand experience of the horrors at the Western Front.

The cast were all aged under 20 and the adjudicator was most complimentary about their performances and praised how well they had worked together in such a challenging play. We also presented the play for one night at the Community Centre where it was very well received by our own audience.

At the final adjudication Beth Strain won the Best Under 21 Actress award for her portrayal of the nurse Edith who goes out to France. The adjudicator added it could well have been the best acting performance of the week. The play also won the costume award for their careful choice and authenticity.

Pictured with the awards are L to R Beth Strain, Grace Murray, Eve Murray and Grace Connor. Also pictured with Beth is Hamish Carroll who made a cameo appearance as a soldier at the Western Front. 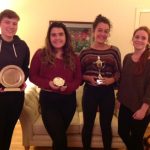 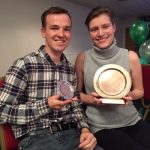 Our Christmas social was a great success. Thanks to everyone who attended and Stuart Landreth who organised it all.

Organised by Stuart and Bev Landreth. Another great night and enjoyed by all with an excellent attendance. Thanks to everyone for coming. The quiz was won by the Dementors team –  Sue, Judith, Mick and Malcolm.

We held our Domino Drive at the Cleveland Bay organised by Geoff Mankin. The winner was Marian Johnston and the Runner-up Annette Simpson. Thank you to everyone who attended and made this a great night.

This event was well attended and a great success. Thank you to all who took part in the quiz and enjoyed the buffet. A great success!!

This year Cliffe Theatre’s entry was “The Tell Tale Heart” by Edgar Allan Poe. This was performed by David Lynch directed by David and Stuart Landreth. David was nominated for 3 awards (Best Actor, Best Technical Presentation and Originality).David won the Ruby award for Originality. Congratulations from everyone at Cliffe Theatre.

Thanks go to Stuart Landreth for arranging and preparing the questions for our quiz night. Thanks also to Bev Landreth for keeping the scores. A great evening which was enjoyed by members, patrons and friends who came along to support this social event and test their general knowledge! A buffet was provided half way through the quiz which provided us with a welcome break from some hard thinking and racking of brains to answer some of the questions. We had ‘Babses Babes’, ‘Fairheads’, ‘Lynch mob’, ‘We know that’ and ‘GJ’s, GJ’s’ for team names. The winning team was ‘Super Six’ – Dot Bell, Cath McCarthy, Rosie McCarthy, Sarah McCarthy, Chris Atkinson and Jack Hamilton. The runners up were ‘One over the Limit’ – Jill Elcote, Maggie Nicholls, Marion Johnston, Kath Kilcullen, Sheilagh Chadfield, Marjorie & Will Reah. Well done to everyone who took part.

Jan Nicholson led 15 members and friends on a walk along the river starting at the Barrage. It was warm and sunny, and everyone enjoyed a lovely evening – Finishing off with a meal at the Talpore. Thanks to Jan for arranging and leading the walk. We will advertise any other ‘walks’ in our calendar below.

Was held on at the Cleveland Bay. It was lovely to see so many members, patrons and friends who came along to support this event. Thanks to Geoff Mankin for arranging the evening and thanks to Ann Humble for organising the delivery of the pies and peas which were enjoyed at ‘half-time’. The winner was Jen Dodsworth and second was Sheilagh Chadfield. Hope to see many of you on our quiz evening (19th July) when there will be a light buffet. Please let us know if you are attending to help with numbers for catering. Please bring along your own drinks.